We are now moving into part 3 of  How to Mix a Hip Hip Vocal & Instrumental.  So now that we’ve covered the treatment of the Instrumental in this article here, we are going to move onto mixing the lead vocal.

For the verse vocals we have a few different areas to target.

1. Vox – These are the actual leads vocals.
2. Dubs L&R – These are overdubs consisting of two mono tracks – Left and Right.
3. Adlibs – Background vocals that don’t directly impact the performance.

So the goal was to get the Vox as clean and clear as possible and get them to fit into the instrumental without ruining the integrity of the performance.   In regards to the Overdubs these were meant to accentuate the Vox rhymes so they would have more impact.  The adlibs only came in on a couple spots and they needed to be in the background of the track which gave the song a bit of character.

Manny Marroquin EQ
The goal with this plugin was to brighten up the vocal and make it more present with out mucking around too much in the mid range. 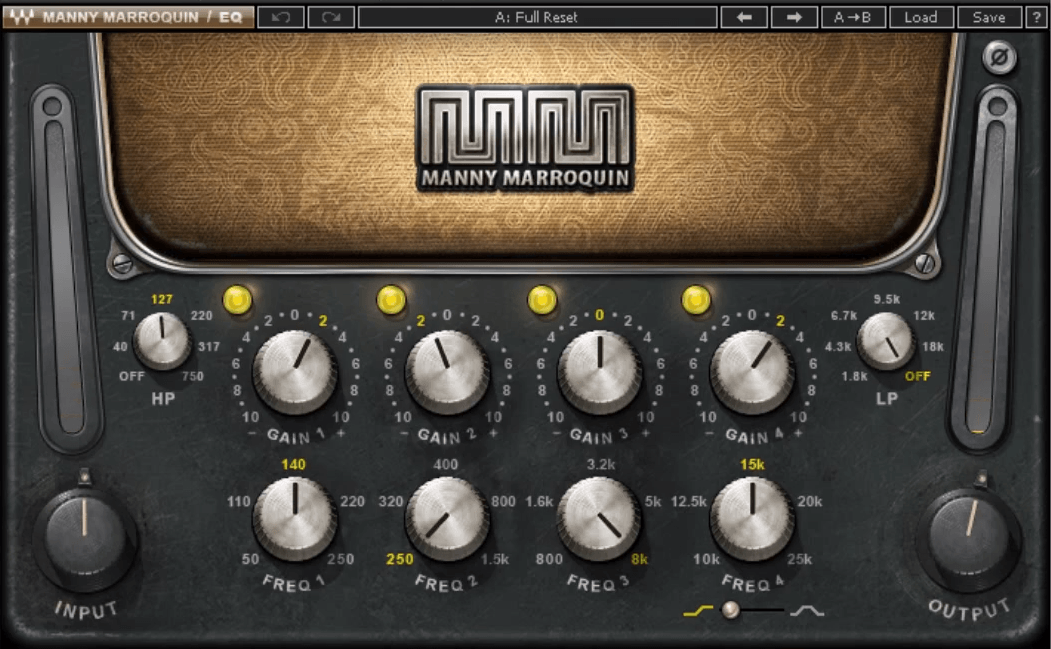 Manny Marroquin TRIPLE D
This particular plugin is a bit harder to explain when it comes to specific settings because numerically, they don’t exist.  The best way for me to explain how I used this plugin is to try and articulate what went through my mind when I was adjusting the settings.   I ended up using all three sections of this plugin. 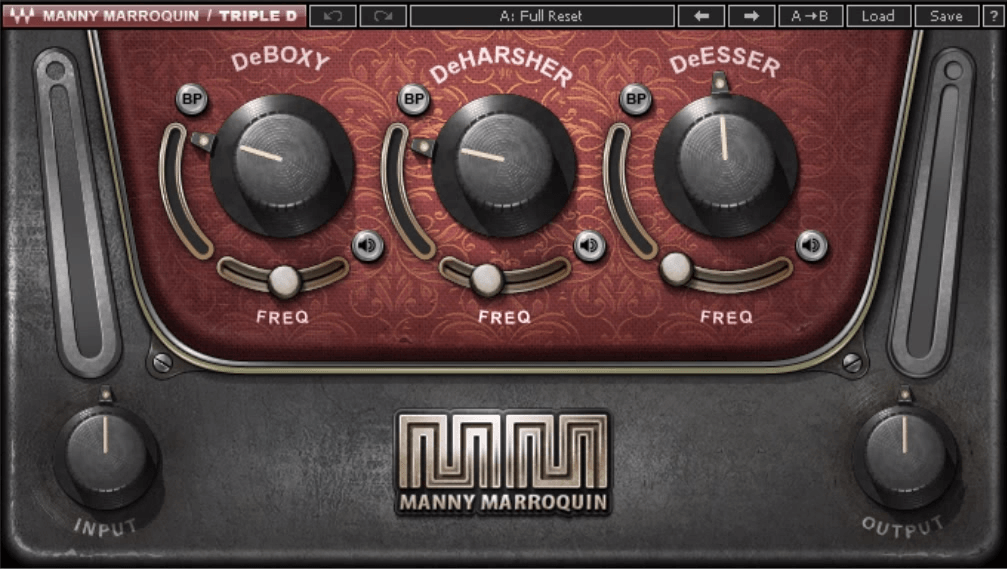 DeBOXY
With the DeBOXY section I wasn’t really hearing the problem as a “boxy” frequency but more cloudy.  There was something about that area that was making the vocal almost unintelligible in the beat.  This setting made the vocal fit much more inside the track and was easier to understand the lyrics.

DeHARSHER
There was definitely a harsh quality to the vocal at a particular frequency.  The DeHARSHER was able to keep that frequency in check by only removing it once it passed the set threshold.

DeESSER
Lastly the DeESSER, which is self explanatory.  This was used to take out as much of those annoying Esses as possible, and this plugin worked great.

Avid Dyn3Compressor/Limiter
The vocals were fairly dynamic and borderline bouncy.  Now with vocals that are this dynamic, it is pretty easy to ruin the performance with a lot of compression.  If the threshold isn’t set just right it can sound like its pumping or struggling in certain parts.  So my thought was to set up the compressor to shave and sculpt the peaks while taking out as little as possible.  Unfortunately the compressor alone wasn’t able to get the vocals to where I needed them to be.  It ended up taking a couple more steps which I will get to later in this article. 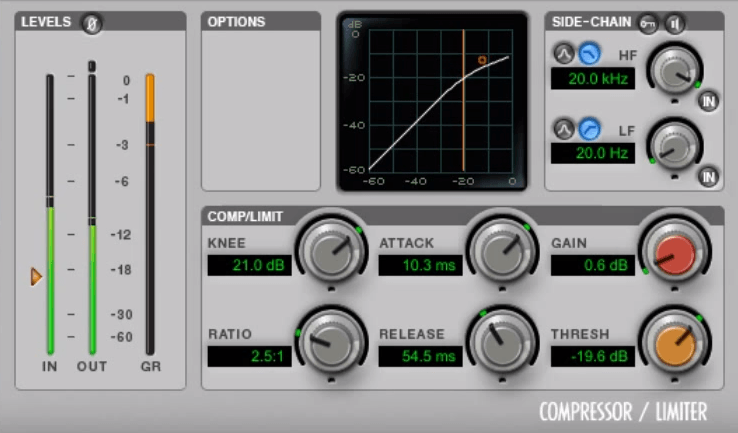 The first thing I did was adjust the knee so it was closer to a soft setting.  This allows the compression to ease in instead of hitting the vocal so hard.  I just felt like it did a better job at sculpting and shaping the sound which was my main purpose for using the compressor.

The ratio is quite low at 2.5:1 because of the dynamics in the vocal.  If I used anything higher it started to sound like the vocal was pumping, anything less and it wasn’t doing very much.

The attack is set to about 10 ms and the release to approx. 55 ms.  The attack was set to a point where enough of the sound could come through without being effected yet still allow me to control those pesky dynamic peaks.  I set the release to a point where I felt it was reacting with the vocal in a musical way.  I set it by ear to move as much in time with the vocal as possible

I used a little bit of make up gain and the threshold was just set by ear until I liked how it reacted to my settings.

CamelAudio CamelCrusher
This was used as sort of a replacement for parallel compression but not entirely.  It did a similar job in the fact that it did bring up the lower levels in the sound, getting them closer to the peaks.  But it also flattened the peaks a bit, in a pleasing way, as well as add mid range harmonics to the vocals.  Ultimately it made the vocal louder, evened out the dynamics and also added some presence. 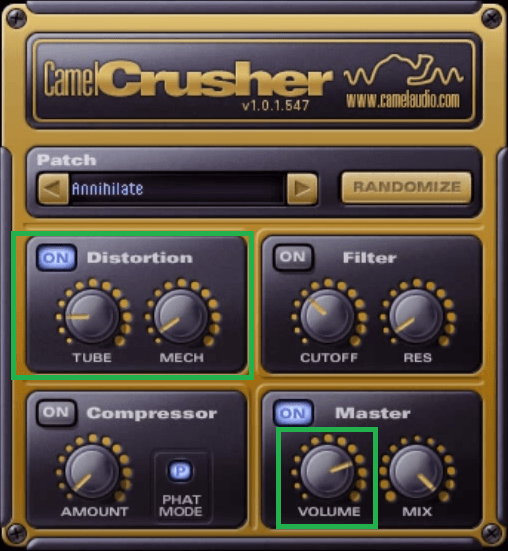 I only engaged the Distortion section of this plugin which has two settings – Tube and Mech.

The Tube Knob sounds like its adding in some low – mid harmics and I kind of view it like the Low Shelf (not literally).

The Mech Knob sounds like its adding in mid-high harmonics and I view this as the High Shelf (again, not literally).

I also had to pull back on the Volume knob in the Master section because engaging those distortion knobs was adding more gain.

MAXIM
The final Stage of the Vox was the Maxim Limiter.  This was the last line of defence to catch any peaks outside of the set threshold. 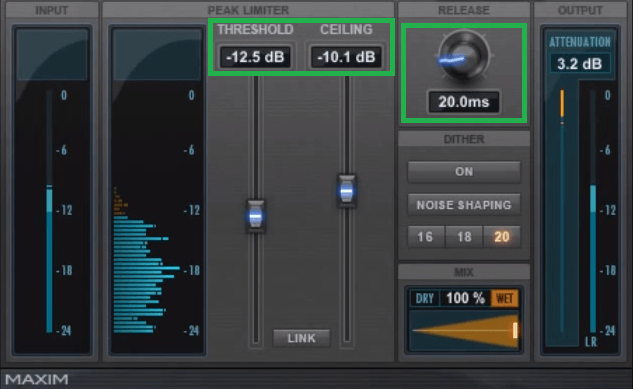 I’m taking out a MAX of -3.2dB, which was rare.  The average was approx. 1-1.5dB.  But even the rare attenuation of 3.2dB wasn’t very noticable because I set a fast release of 20ms.  Once you get the hang of this limiter you can actually get it to sound really transparent.

MAXIM
Both of the overdub tracks were treated pretty much the same, using one MAXIM plugin each.  The goal was to just crush the peaks and keep them both at a consistent level.  I wasn’t concerned with them sounding natural in the slightest because they were meant to add impact to the rhymes and not be intelligible.

Both the L and R settings have a very similar Threshold of about -15dB and a release of 21ms.  I’m shaving off an average of about -7dB to -9dB.

Sonimus Satson
I used the Satson to take out a lot of low end and just a bit of top end.  The main purpose was to to drive the input gain like crazy so I could hit output hard and get all those beautiful harmonics that I wanted to hear 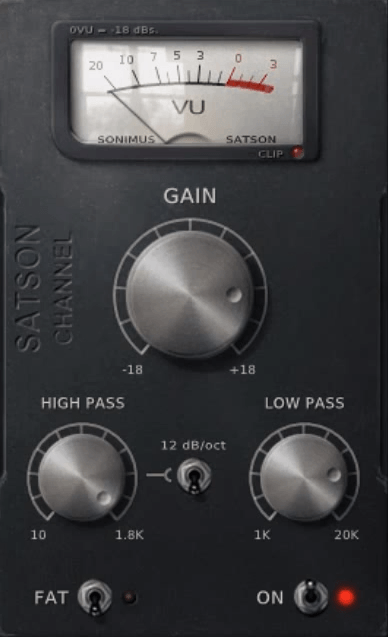 The high pass filter had a very dramatic setting of approx. 1.5 kHz and the low pass was set to about 16kHz.  The slope for both filters was left on the conservative setting so the slope was pretty gradual.  This means that it wasn’t taking out everything below 1.5Hz and everything above 16kHz.  By driving the gain as hard as I did I was able to bring back in some of the low-mid frequencies that may have been taken out, while adding in some distortion at the same time..   These settings resulted in a cool sounding effect but left the adlibs behind the lead vocals.

This was one of those cases where some hidden processing made for a more transparent sound.  We were able  to adjust and fine tune the vocals so they were able to live and share the same environment as the production.

So in the next article we will be discussing the mix of the Chorus Vocals.

YouTube Video Source: Mixing a Hip Hop Vocal Into an Instrumental [Part 3 of 7]