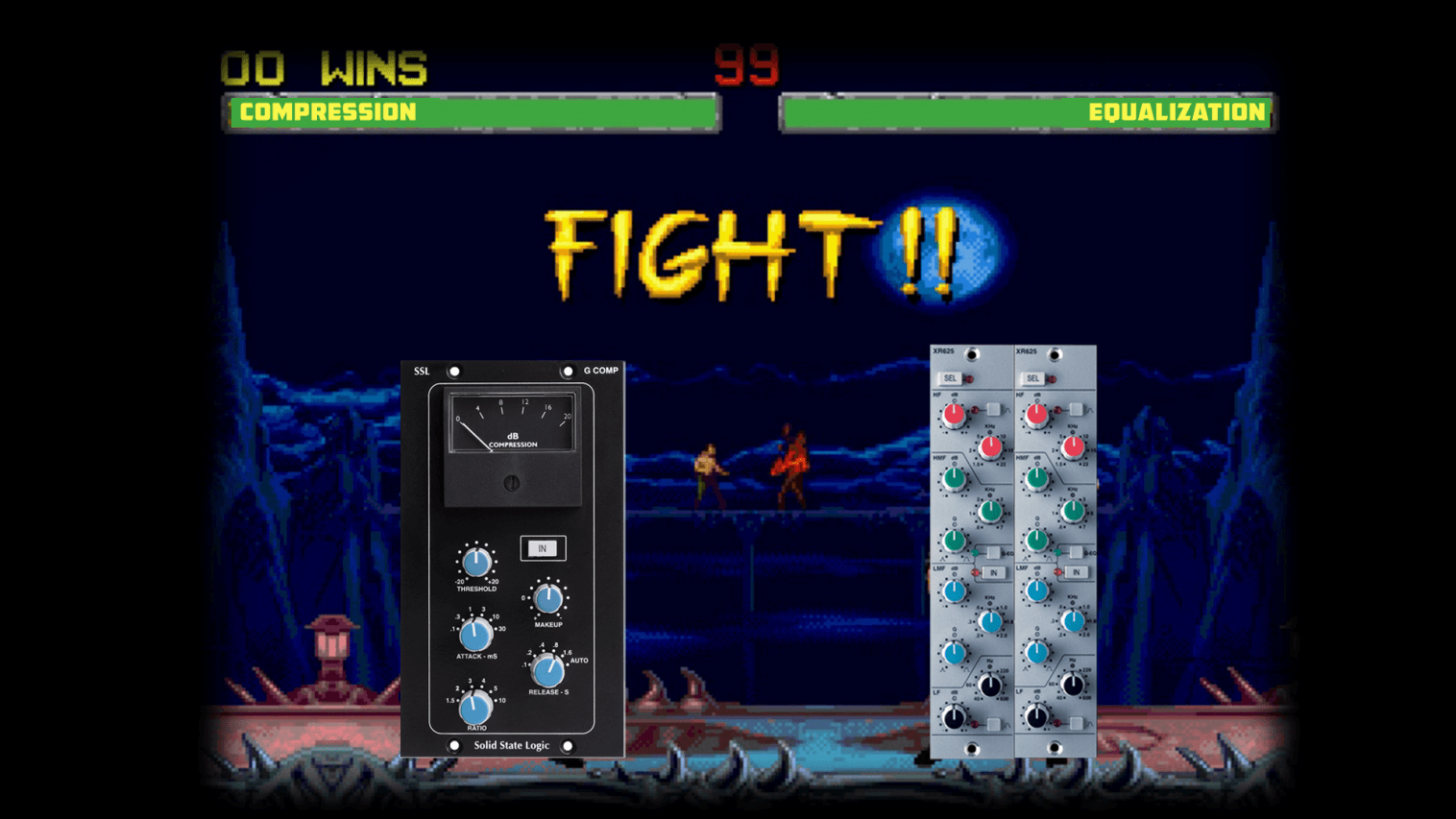 You’re probably thinking: “Is this guy seriously comparing compression to EQ? Everyone knows that they serve two completely different purposes”

And I wouldn’t disagree.

Aside: I actually do use compression as another form of EQ but I’ll explain that a bit later.

This article is more about the mental battle that we engineers face (internally) when determining when to use EQ and when to use compression.

You know the saying: “Always EQ before you compress!”

But then you’ll read a bit more into it and you’ll find people who say they prefer to compress before they EQ.

Seriously what the heck are we supposed to do?

So many conflicting views and each one is prescribed as gospel.

You get the idea!

So what do I personally do, you ask?

Actually, I use every possible scenario in almost every mix. Not because I feel I “have” to but simply because that’s what the record is telling me to do.

There’s Just a Bit Too Much Junk in the Trunk

Are you doing a lot of recording? Yes, I’m talking to you!

Well, if you are then you might find this technique useful.

When you record a track, no matter what instrument, there is going to be a bunch of junk in the bottom end that you don’t want.

I’d say below 100Hz is a good starting point.

Adding compression before you EQ that out will most likely just amplify the junk and give you a cloudy/muddy track.

Sure you could compress first and then EQ after but once you apply the compression, the damage has already been done.

For this reason alone I almost always use a high pass filter (EQ) on everything that has been recorded into the session, before I apply any compression (ex. guitars, vocals, maybe drums etc.)

It honestly just sounds better to me and tends to free up a bunch of space for the low end to sit pretty.

Clean and Clear THEN Under Control

Another reason why you might want to EQ first before you use a compressor is because a particular sound might need a little polish.

Imagine taking a car into a paint shop and just slapping a fresh coat of paint on it.

Sure it might seem nice at first but when you really inspect it you would see the chips, scratches and dents that the paint just can’t cover up.

Though this is not the best example it still does a great job at illustrating how to think about it.

I prefer to get the sound to a place where I think it sounds balanced (frequency wise) and then I apply the compression.

I’m effectively fixing (or repairing) the scratches, dents and the chips before I apply a coat of paint.

Sometimes It’s Just Fine the Way it is

I’m about to make an extremely prolific statement, ready?

But all kidding aside a lot of times, I get really great sounds that don’t really need an equalization prior to the compressor.

So I’ll just slap the compressor on it but only if it needs it, of course. But I don’t have to tell you that.

Look, have you ever used VST synths or samples from ridiculously high quality libraries?

Me too and I get them in every session.

It really is commonplace these days to have a lot of sounds come from libraries. Sometimes the entire session is from various VST libraries.

In this case, I prefer to skip the “EQ before compression” technique because you seriously don’t need it – usually.

Remember that mixing is not about imposing your will on the record but trying to enhance what’s already been given to you.

We can talk about some creative stuff I like to do with EQ.

There are times when I will take an EQ, increase the gain of a certain frequency range and push it up into the compressor because it makes the compressor react differently.

It’s really hard to explain in writing what it sounds like.

It’s just something that you have to experiment with until you will have that “aHa” moment.

Though it might still sound cool, it just doesn’t have the same effect.

That’s when you truly realize that this whole EQ before compression debate is kind of silly.

Remember how I said early that I was going to tell you how I like to use a compressor as an EQ.

The compressor really is a magical tool. When you can figure out all the different things it can do, you really open your world to multiple techniques.

One of my favorite uses for it is sharpening a sound.

Sure you could bust out an EQ and try to remove some of the low mids and maybe boost some of the highs to get the ear sizzling mid range but it just isn’t the same.

So next time you’re in a session and you want a sound (try a vocal) to be “sharper” or dare I say “punchier” try using a compressor instead of an EQ.

It’s funny because sometimes I might not even use an EQ on a sound, just a compressor, and the assumption is always that I did a ton of “professional” EQ work to get it sound that clear.

But those assumptions are wrong…

Okay, here’s how you do it…

Just take out your fav compressor, almost any one will do.

These are starting points but damn good ones at that.

Now bring your threshold down until you start to hear it working. You will probably see anywhere from 6-10 db of Gain reduction. Perfect!

From here all you have to do is tweak your attack and release until you like how it sounds.

Of course a constant 10dB of gain reduction might be excessive so just play with those four parameters until you feel like you’ve hit the sweet spot.

When done right the compressor can do a really good job of tighten and sharpening a sound.

**Tip** Try and use the attack as the tool that determines how sharp the sound will be and time the release to the rhythm of the sound.

I usually like to see the needle moving in rhythm with the sounds, though sometimes a really long (pegged) release also sounds good.

Seriously, Go And Try It

Open up your DAW and try that cool trick, you are probably going to love it!

There’s one other cool compression technique I like to use instead of an EQ but I think I overwhelmed you enough so far.

Maybe I will talk about it in another article.