DeEss the Low End?  How is that even possible when there aren’t any S’s in the bottom end?

Well truthfully it’s not possible but what I am trying to achieve with this post is to flip your thinking on dealing with the lower frequency problems and treat them like we would with the higher frequencies (i.e. the S’s).

Why do we DeEss a Vocal?

So in order to understand the process of “DeEssing The Low End” we first need to understand why we would even DeEss a vocal in the first place.

Let’s say you had a vocal with a lot of S’s in it, would it make sense to pull out an EQ and then Low Pass all the top end? Or maybe even use a peak filter and then take out 4-6 dB’s at 8k (for example)?  Probably not, I mean it could happen under a particular circumstance but more often than not it wouldn’t.  The reason you wouldn’t do that is because it dramatically alters the tone and character of a vocal.

Why Use This Technique on the Low End?

A lot of times when a vocal (or any acoustic instrument really) is recorded in a home studio it is probably done in a not so desirable sounding room.  Every room has a fundamental frequency (as well as harmonics that are multiples of that) that will cause resonance in a performance if enough energy is in that frequency, from the instrument.  You end up with a boomy sounding track and almost always is hard to place in the mix.

Other reasons could be the recording gear or maybe even poor microphone technique by the artist.

Usually though the resonance is not constant because if notes or chords are changing then the performance is moving outside of that resonant region.  So instead of grabbing an EQ to do “static” equalization, why not grab a dynamic EQ that will only pull out the frequency when the problem exists?

How Do We Fix This Problem?

If you can’t hear the problems because of your room or maybe you are new to the game so you are still learning what to listen for than you can always grab a Frequency Analyzer and look for the problem that way.

Once you know where the problem is just load up your favourite Dynamic Equalizer or Multiband Compressor.  I find myself using the Waves C1-sc a lot for this particular kind of stuff but realistically anything that will split the frequency bands, so you can isolate the low end, will work.

As far as settings are concerned these will be pretty personal from engineer to engineer because ultimately everyone hears differently.  I’ll give you a general idea of what settings I would use. 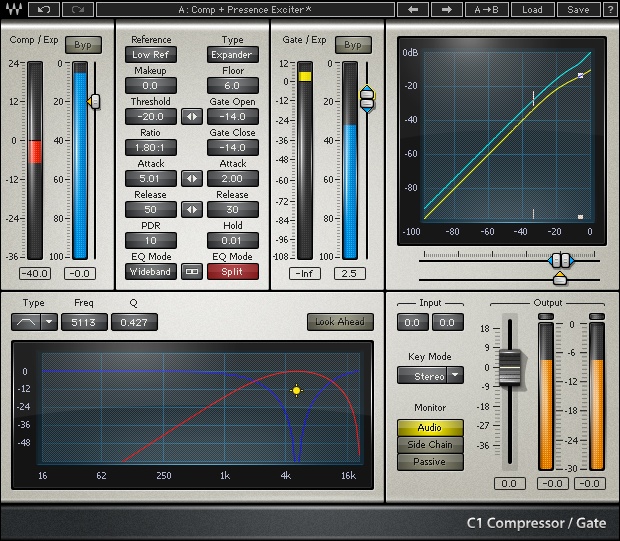 I find that when dealing with the lower frequencies I like to use an attack that is fast but not too fast.  The reason is, I don’t want to take out too much of the low end because it really is the body of the sound and will start to sound unnatural if there isn’t enough of it there.  I find anywhere from 5-30 ms is a good range for me.

For the release I will try and set it up so that it moves with the track in a pretty musical way.  The idea is that I want the compressor to hold onto the sound long enough so that the low end doesn’t come back to fast but not too long so it doesn’t move with the waveform in a unnatural way.  I find anywhere from 30-250ms works pretty good.

The ratio is going to determine how much of the sound is pulled back once it crosses the threshold.  So again, I don’t want the threshold too low because then it’s like putting up a wall in front of those low frequencies.  I need to give it some wiggle room because every resonant peak is going to be different in terms of amplitude.  I would probably go for anything between 3:1 and 8:1.  I would find that sweet spot and see what works best for the sound.

This one is pretty simple and there is no real specific answer.  A lot of it depends on how much gain your sound has going into the plug-in.  But to give a general answer I would aim for maybe 3-10 dB’s of gain reduction but it really does depend on the sound.

So hopefully you understand now why I was talking about “DeEssing The Low End” because ultimately that’s not what we are doing but the concept is very similar.

Again if you are still confused about the concept just remember this.  Just like how S’s poke out every so often, resonance in the lower frequencies do the same thing.  So try using a plug-in that works like a DeEsser but will allow you to apply it to the Low End.