With the success of my last two articles with Ghislain “Gee” Brind’Amour, I decided to reach out to him again to see if he would be interested in doing something a little bit different .

My idea was to do an interview/tutorial (all in one) where I would focus specifically on one part of a song that Gee mixed – in this case I chose to talk about mixing vocals.  He sent me a few records to check out and I decided to go with a record called “Got to Get on” by Amos J.  If you have the time, go check out that record and support him, it really is a great song.

As far as the finished product, I would love to give all the credit to Gee because I feel like he nailed the mix but to be fair Amos’ performance was stellar.  He really poured a lot of emotion into his vocals.

So when I first sat down to listen to the record the thing that stood out the most was that the record didn’t seem “over mixed”.  I felt like Gee did a good job of allowing the music to guide this record to the finish line.

I asked him if this was a fair assessment or if the processing was just so transparent it was hard to hear.

“It’s fair enough to say.  The whole arrangement, when you hear the song, is pretty simple although there is a lot of guitar stuff going on.  Essentially all the parts fit together nicely and I didn’t have to fight with anything, so yeah I didn’t over do it.   Everything just flowed naturally which led to the end result”

To me the balance of this mix was spot on.  Everything is where it needs to be so that the listener can be told the story in the most efficient way.  The vocals take the lead but the guitars are just loud enough to help support the emotion of the song, which is very important, at least to me.

Now with the vocals in particular, I asked Gee if he could explain how he was able to achieve such a clean sounding vocal.

“Yeah, well you know it all started at the source, he [Amos] is a good singer so that always helps.  We recorded the vocals together over at Planet Studios in Montreal.  They have all the fancy mics and pres so the whole singer to vocal chain was done quite well.   There was minimal editing going on, he tuned whatever he saw fit and as far as processing it was pretty basic stuff.  There’s a bit of EQ, compression and a little sweetening on the top plus a little bit of reverb and delay. You know stuff that’s pretty common on pop records today.”

“Everything was done in the box on this one”

This plugin was used for gain staging purposes.

“He’s a bit of a dynamic singer and I’m not one to compress too heavily when recording.  The trim gets placed before everything to set the level of the tracks.  I have the trim on pretty much every audio track in the session to get the levels to a more conservative peak value and from there I go in and process.”

This plugin is being used for some of the analog colour.  Gee went with the Neve because of its hyped highs and lows, which worked well for this vocal.

“After the trim I have my trusty Steven Slate virtual console and I picked the Neve on this one.  I usually audition them all to see what fits in the context of the song.

The Neve adds a bit of top and a bit of bottom so it’s gives you a little bit of an instant gratification.  It’s subtle, I won’t lie, it’s more of a cumulative effect of it being on everything.” 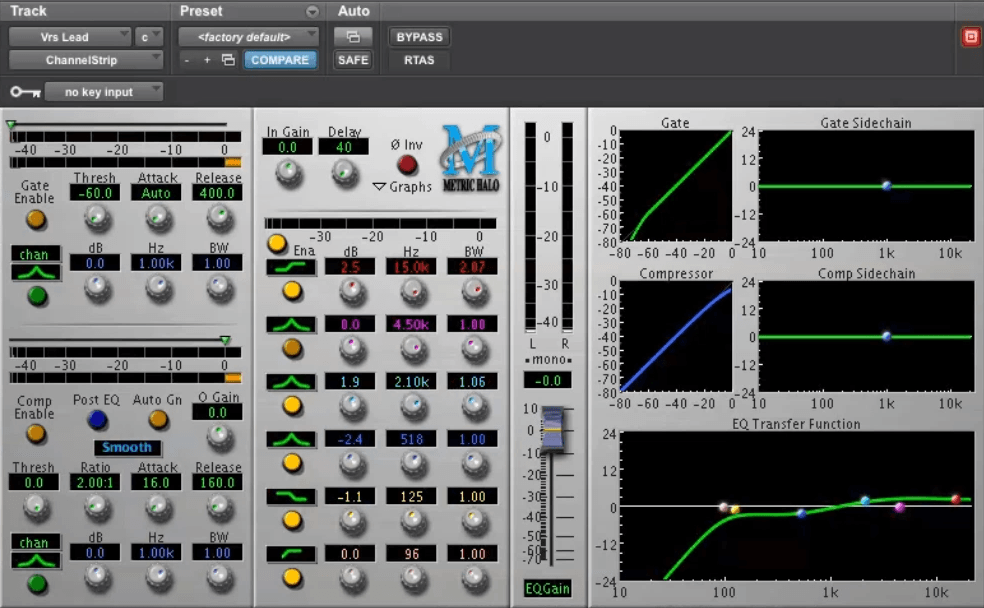 The MH Channel is being used to help shape the vocal into something that’s more useable in context with the rest of the record.

“After the VCB, there’s a little subtractive EQ going on.

I’m cutting out that boxy area around 518 Hz using a bell shaped filter with a relatively wide Q and I’m also shelving out around 125 Hz because it was still a little muddy down there.

I’m cutting pretty aggressively with a high pass filter around 96 Hz; some of that is because of the room we recorded in.   The room had a bit of a resonant tone that I wanted to get rid of.”

There was also some boosts made at 2.1 kHz and 15 kHz to help open up the vocals around the mids and highs. 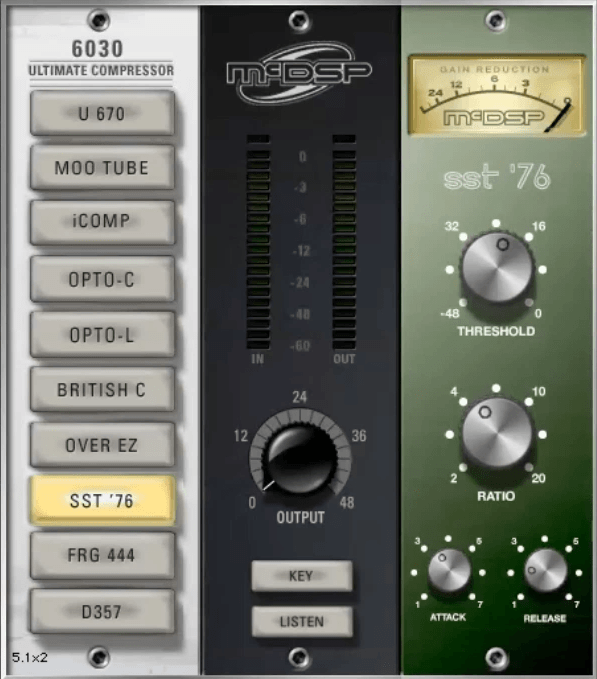 A little compression is being added to help smoothen out the vocal performance.

“This is their rendition of an 1176 and if you read my article, you know that I love that compressor.  This one is cool but it’s not the most colorful emulation of an 1176 but it definitely reacts similarly to the hardware.”

I asked Gee to explain why he used the settings that he did when it came to the ratio, attack and release.  Here is what he said,

“I’m not a big ratio guy, I have it set to about 4:1 which is usually my starting point.  It’s rare that I go higher and I usually go lower to be honest.

The attack was set with some trial and error but it kind of works with the rhythm of the vocal.  I want enough of the vocal to come in before the unit reacts.  I like a quicker release on vocals because I want it to come back fairly quickly to not being compressed any more.

In my book, compressor settings aren’t scientific.   I just feel it out and often times I’m not even looking, I’m just moving it up and down until it sits right.” 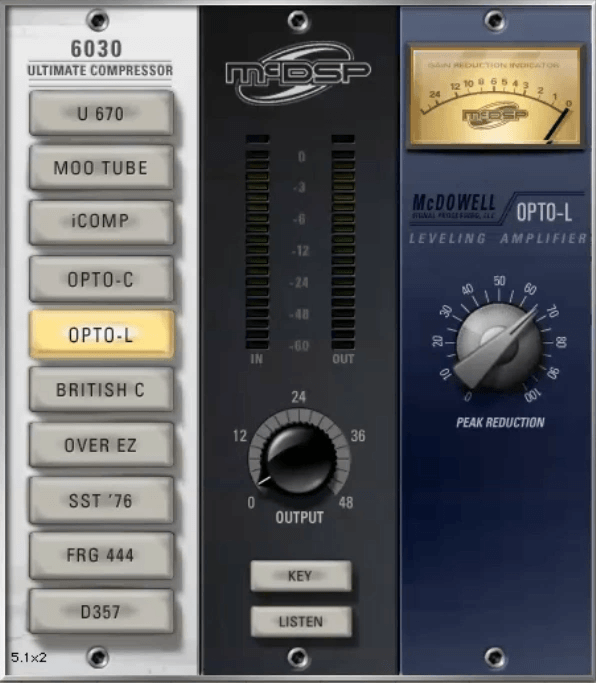 This compressor is being used in limit mode to help catch the odd peak that the 1176 compressor couldn’t.

“This one here is like there LA2A but in Limit mode.  This one is used to peak limit the vocals.  It’s not super colorful but it works extremely well.  It’s just tickling it.

Since the attack on the 1176 was slower this one is catching whatever was left off but in a different way since it’s a limiter.  It really keeps the vocal in check and puts it in the pocket.” 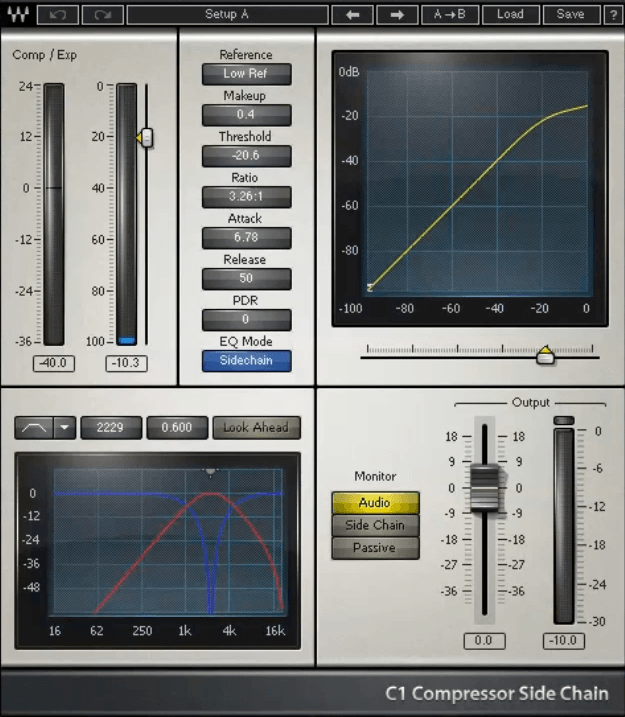 Often times this plugin is great for taking out a frequency that may have a bit of harshness to it.

“This one helps smooth out the mid range because it’s compressing it.  There’s nothing crazy going on in the gain reduction but it’s just enough to round out the mid range so that when I go to push it afterwards it’s not so aggressive.

With pop records, I find that you want that vocal up front and you have to find ways to make it more present without actually jacking the volume.”

“I used this essentially to sweeten out the vocals; it’s not surgical by any means.  The top end is wonderful on it because you can drive it pretty hard and it’s rare that it will sound aggressive.

I’m boosting 10k on the Air Band, then 2.5k on the shelf which is helping me sweeten out the mid range that I cut with the Waves C1-sc.  I told you about that 650 band and on here I’m boosting it a couple notches, it’s very musical on vocals.  Lastly I’m boosting a little bottom end at 40 Hz just to help get a little presence on the vocal.”

Gee was very generous with his time in helping get this Video/Article together.  I like talking to Gee because he’s constantly searching for new tools and strategies to up his mixing game and in turn I always end up learning something from him.

I decided to split this up into 2 parts just because of the amount of information was too much to fit into one sitting.  Once you are finished reading or watching, please go and check out Part 2 where we deal with effects, parallel processing and automation.

If there is something that you didn’t understand or maybe you just need clarification, Gee has agreed to answer your questions in the comments section below or in the YouTube video comments.