Isn’t it annoying when you’re adding a plug-in to your mix but there isn’t any gain compensation to account for the increase of overall output gain?

It’s hard to tell if the sound is actually getting better or if it’s just getting louder.

In an ideal world it would be nice to have that automatic gain compensation on every plug-in but unfortunately you are left to your own devices.

I’ll be honest that last statement had a bit of sarcasm to it because honestly this is a first world problem.

But it still would be nice sometimes to have the ability to adjust the input and the output at the same time.This way the sound changes but the volume remains at fairly consistent level so we can now make an assessment on whether the sound is changing for the better or the worse and not be tricked by a little boost in level (which usually sounds better).

The creators over at Blue Cat Audio have created this simple (ingenious) little plug-in called Gain Suite, which actually is free and to all the Mac users, yes it is compatible for you too.

This plug-in allows you to essentially group a number of instances together to control the volume of multiple tracks at the same time.  It also has a mid/side mode which is cool for simple stereo widening of tracks that potentially need it.

Setting up the Gain Suite Plug-in

In the case of this article we are not going to use it on multiple tracks but just one track.  So to give you a break down, we are going to set it up so there is one instance in the first insert, then a plug-in of your choice in the second insert and lastly a second instance of the Blue Cat Gain Suite in the third insert.

On the first instance of the Gain Suite Plug-in, we need to select a group.  In this case I am going to choose Group “A” 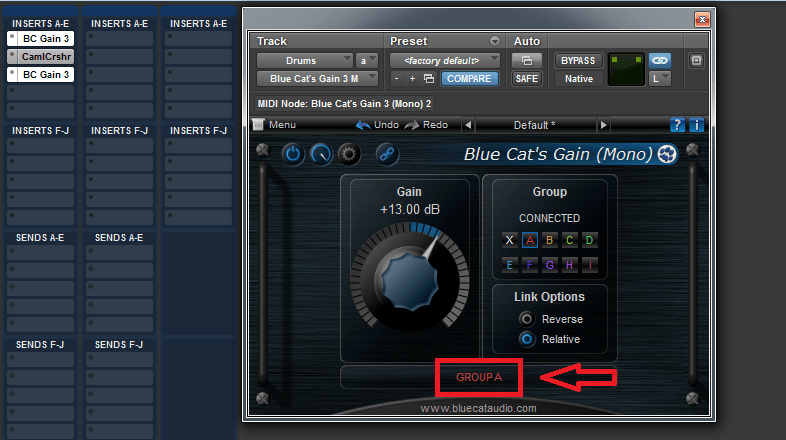 On the second instance of the Gain Suit Plug-in, we also need to choose the same group that we did for the first instance, that way the two of them can communicate with one another. 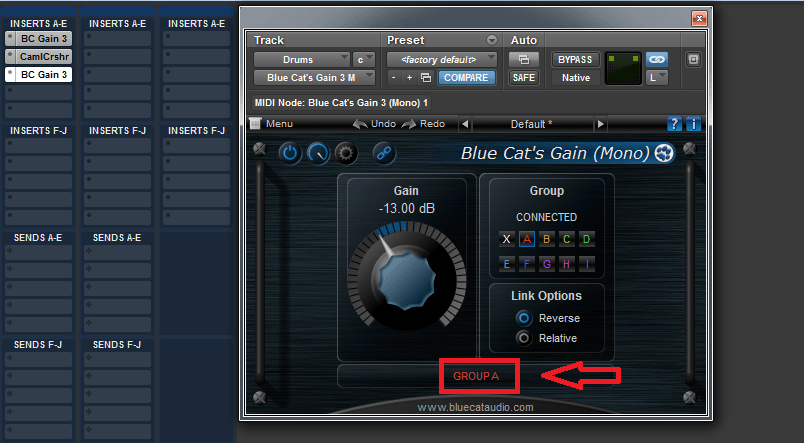 That’s all we need to do to set it up, pretty simple right?

Now if you have your favorite plug-in loaded up just set it up to where you think it will be a good starting point and then drive the input of the first Gain Suite Plug-in.

What you should hear is the sound changing but the overall volume (level) should remain the same or at least very close.  I say very close because if you are adding distortion the peak volume might actually decrease because of the compression it adds but the relative volume should stay the same.

But the truth of the matter is that this little tip is something that’s pretty damn simple to do but can actually be very beneficial in the mixing process.

I think that this technique is actually really useful for beginners because it can be a form of training to help hear the difference in sound alteration without a level boost skewing your perception.

Though it can be useful for pro’s alike.

Try it out and let me know how it works for you.