Learn HOW to hear frequencies in under 7 mins.

Managing Bass in a Mixing Session

The multi-track session files for this tutorial are no longer available, sorry for the inconvenience.

I decided to go with the bottom end for this tutorial because in this particular record I had to go above and beyond what I would normally do to get my bass to work.   On top of that the kick in the record was not meant to be overly boomy so I had to try and figure out a way to still get some knock with out making it seem overbearing.  Also, I needed to figure out a way to have the bump from the kick not interfere with the bass.

What We Are Working With

Most of the low end in this record is coming from 3 different sources:  The bass line, the kick and a signal generator (which I added).

Then to get the bass guitar and the kick to live together I decided to side chain the signal generated bump to the bass guitar so that whenever the kick would hit, it would pull the bass down for a split second. It seemed to work really well in this case and for the objectives of this record.

Setting up a Send

First thing you need to do is go to the Kick (Kick Perc) and set up a send, in this case I called mine SUB.  After it is set up just make sure the volume fader on the send is set to 0 dBFS.

From there you need to go back to the gate and in the key input choose the same bus that you used as your send from the kick (SUB).  Now the gate is set up to only open when the kick is playing.

I’m using the Avid Signal Generator to add in some low sub to the kick and in this case I am using a sine wave and 63 Hz as the frequency. 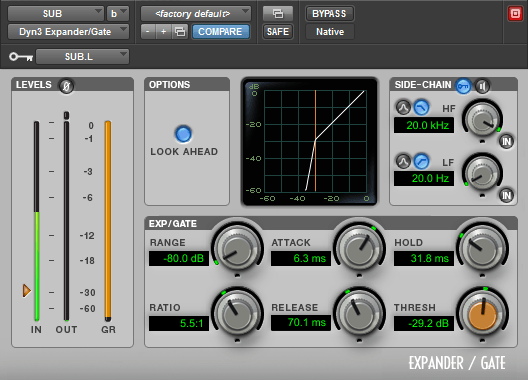 Also the settings I used on this gate where meant to be complimentary to the original kick.  I tried to set it up so that it could closely follow the shape of the original kick.  You can use these as a starting point on your own records but I would definitely customize it for your specific needs.

This is what the original kick sounds like on its own

Now the Signal Generator and the Kick together

Setting up a Send

Now our signal generator seems to be working well with the original kick and sounds complimentary but we must set up another send so that we can use this to trigger the compressor on the bass track.  I called the send, Bass S/C and then used the same path for the key input of the compressor that is on the actual bass itself.

Since the signal generator is producing a low frequency that lives in a space similar to the kick,  I set up a send that triggers the compressor, through side chain, and ultimately pulls the bass line down enough for the low end of the kick to pull through. 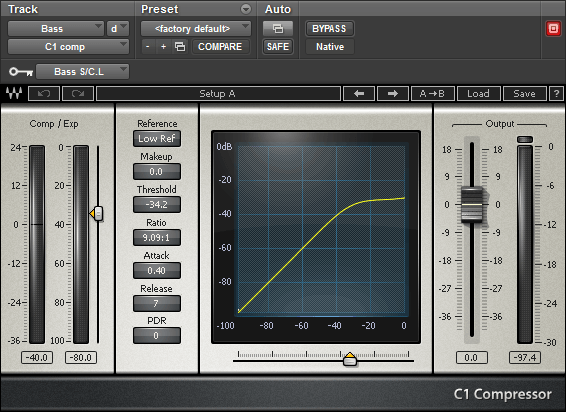 Ratio – I used a fairly high ratio of 9.09:1 because I wanted the bass to be pulled down fast and aggressively

Attack – The attack was set very short (0.40 ms) because it moves the bass out of the way very quickly so the kick can be heard first

Release – I flirted with a longer release but settled on a quick 7ms because I felt it followed the shape of the kick the best and didn’t hang on to the bass for a long time.  The longer it holds on to the bass than the more noticable the sidechain is.  I didn’t want this to sound like an EDM record, I just wanted to hear the bump from the kick.

[audio:https://modernmixing.com/wp-content/uploads/2013/09/Kick-and-Bass-NO-Sidechain.mp3|titles=Kick and Bass with NO S/C Compression]

[audio:https://modernmixing.com/wp-content/uploads/2013/09/Kick-and-Bass-WITH-Sidechain.mp3|titles=Kick and Bass WITH S/C Compression]

Here is the entire track with no S/C Compression

[audio:https://modernmixing.com/wp-content/uploads/2013/09/Track-NO-Sidechain.mp3|titles=Entire Track with NO S/C Compression]

Here is the entire track with S/C Compression engaged

Like I mentioned at the beginning of the article, this is something that I wouldn’t normally have to do but in the context of this record it seemed to do the job.  This a good example of how we as engineers can’t be set in our ways; we have to be willing to do new things all the time in order to help the song sand out.

Learn how to hear frequencies in under 7 mins.

Learn How to Hear Frequencies in Under 7 mins