Today, I wanted to talk about finding the tempo of an instrumental in Pro Tools.  This is probably the first thing I do when I get a session that has a two track instrumental with multiple vocal tracks.  It’s important to the process of mixing and tracking because it helps with:

I’m sure there are a number of other uses for it that I didn’t list but you can see that it’s a great starting point for a session.

Let’s take a look at the steps involved with finding the tempo of an instrumental.

Normally what I like to do is visually look at the waveform and see where the first obvious transient lives – In other words the first downbeat.  I would move the cursor to that point, listen and determine whether or not that is in fact the first down beat. 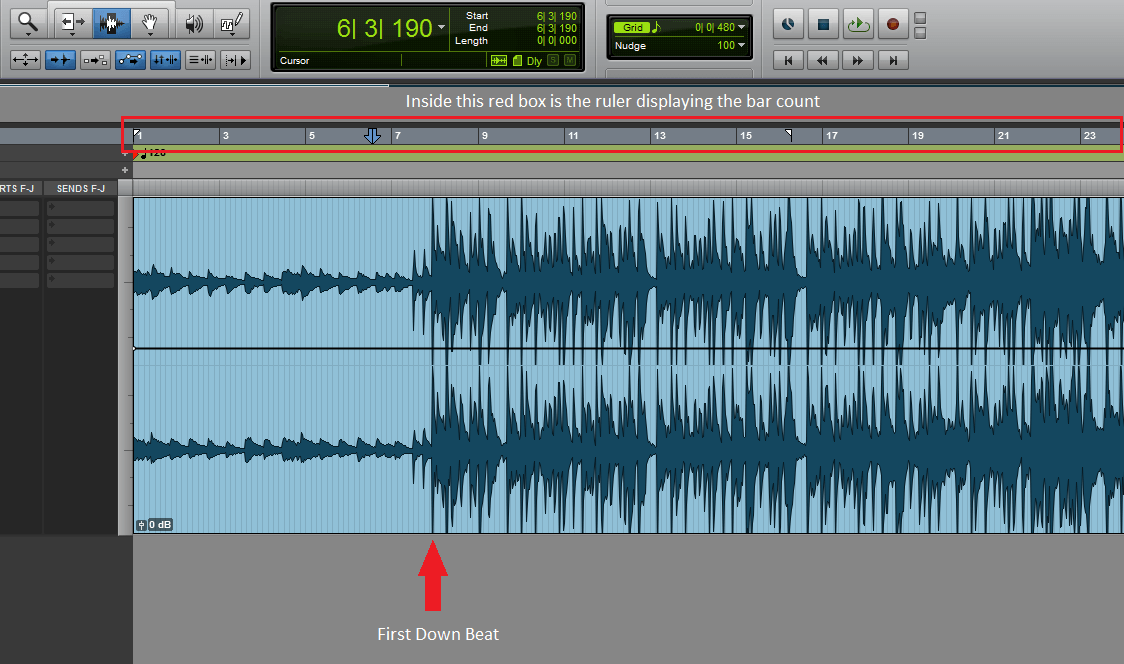 Sometimes a production will come in on beat 2 [maybe a snare hit] and it could mess up the rhythm when you’re setting the tempo so just make sure that the first transient is actually the first beat of a bar.  Most DAWs will display a bar count via the ruler above so in order to use that ruler accurately, we must get this step right.

If the downbeat isn’t quite obvious by visually looking at it, you are going to have to know how to count bars so that you can hear and immediately identify the first down beat.

Once you have identified the first down beat, it’s best to zoom in on it as much as you can.

Now that you are zoomed in put the cursor to the point where you think the first hit starts, chop it up and delete everything to the left.  In other words you are deleting the intro of the song, in most cases.

Once that is deleted you should have a big empty space at the beginning of your track, right?  Good, now take the rest of the wave form and drag it all the way to the beginning of the track.  Don’t worry we will come back to everything we just deleted, have a little faith. 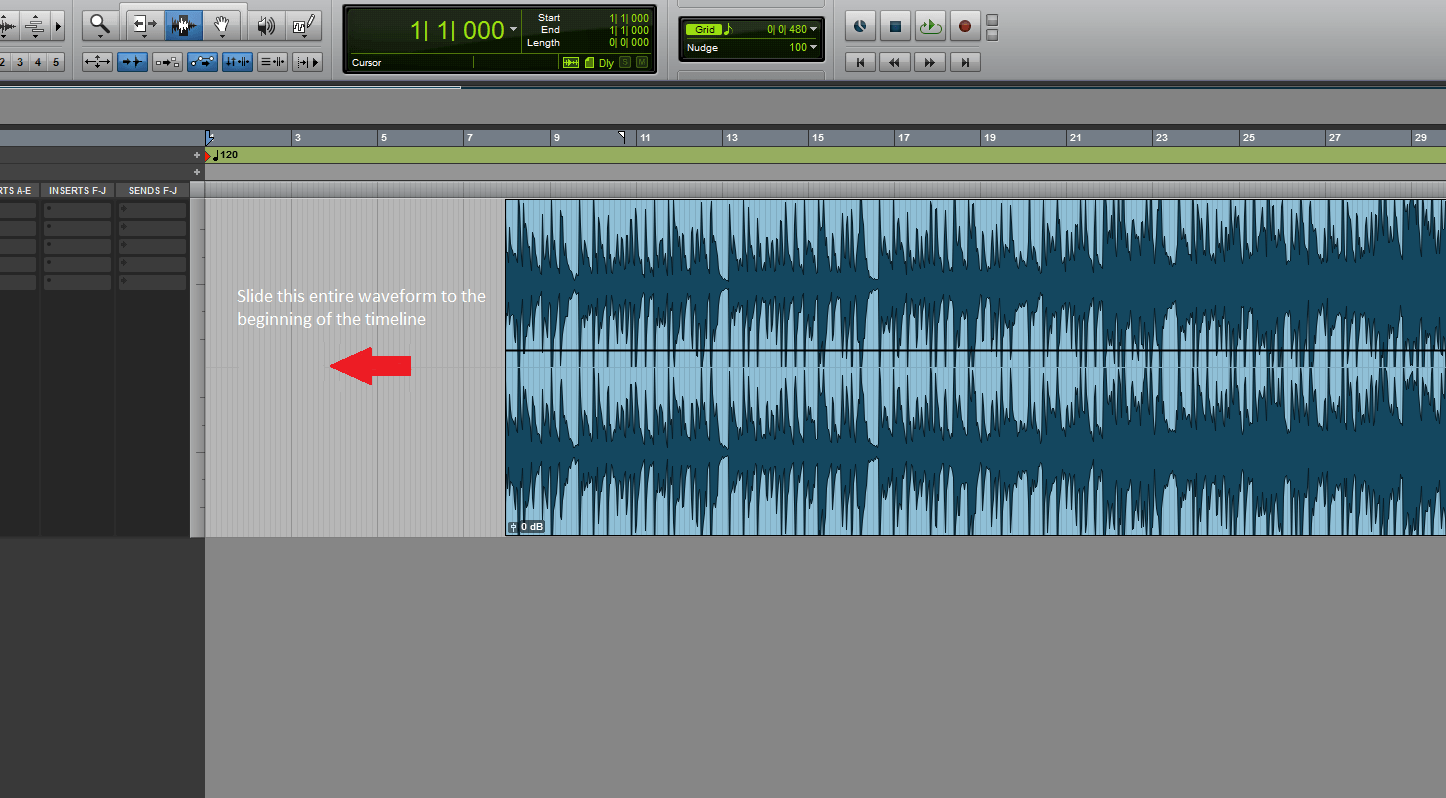 Now we got the track exactly where we want it so we can go ahead and actually do the work to find the tempo.

First thing you need to do is open up the transport in Pro Tools [ctrl + 1 on Num Pad].  See the little conductor guy in the bottom right hand corner?  Make sure that icon is not highlighted and if it is just uncheck it.  That now gives us control over the actual tempo in the transport panel.

In most DAW’s the standard tempo that comes with a new session is 120 bpm so if you can see the number 120 beside “Tempo”, click it so it’s highlighted.

Now push the Space Bar to play the track.  While the track is playing tap the letter “T” on the keyboard, and do so to the rhythm of the track.  What you are trying to do is get an average tempo of the song.

Keep an eye on the tempo as you are tapping the letter “T” because you might not be able to get an exact tempo.  Just eyeball it out and take note of the average.  Stop the track and if the average tempo isn’t set in the tempo field, go ahead and type in.

Now that we’ve got the tempo set we have to verify that everything is lined up.

There is a couple of ways to do this but I will show you the way that works for me.

I like to take visual clues when doing this step because it helps me line things up a lot faster.  One thing that is important in verifying the tempo change is to make sure that you are set up in Grid Mode and not Slip Mode.  By being in grid mode it locks your cursor to the grid lines.  In this case you want the grid lines set to “Bars”.  So every time you click on [or near] a bar the cursor should automatically lock to that bar.

Now you need to go through each bar and visually see where each beat is in comparison to the bar itself.  If the beat is off than we need to make adjustments.

If you have determined that the track isn’t lining up to the grid then now is time to make some adjustments.  Again we can use our visual cues to make some guesses about what needs to be done.

Once you determine if the tempo you set is too fast or too slow make the appropriate adjustments until it lines up to the grid.

What I like to do is go towards the end of the instrumental to see if it is still locked to the grid.  The reason for that is because each BPM that’s off in tempo will multiply near the end of the track.  By being off 1 BPM at the start it could turn into a few bars by the end.  It’s just a good quick way to make sure that everything is locked in and good to go.

Another good, and quick, way to check if you are lined up is to set your cursor near the end of a chorus.  If the beat is lined up to the grid when it comes out of the chorus and into the next verse, than its probably safe to say that you are in the right tempo.

Step 7 – Bring back the Intro.

I would leave the Grid Mode engaged that way it allows you to slide the beat around on the grid.  You can slide it back like 10, 15, 20 bars or whatever it takes to give you enough room to open up the intro.  Once that’s done, grab your trim tool and start to slide the intro out [to the left] until it stops you from going any further.

You need to be a little creative at this point because sometimes the intro may not land exactly on the beginning of a bar.  What I would do is pull the intro out as far as it can go and if it goes past a full bar, but doesn’t quite make it to the next bar, I’d pull it back to the bar it just passed.  Now you can slide the beat all the way to the beginning of the timeline but just make sure you leave 1 bar open.  Once you have it all set up, pull the remainder of the intro out.

Now you have the right tempo for the instrumental but you are also lined up to the grid.  This makes your tasks MUCH easier going forward.

It may seem like a lot of work and a lot of steps but in all honesty it might take me less than 5 mins to do everything.  Plus it saves me at least an hour of time when recording or mixing.